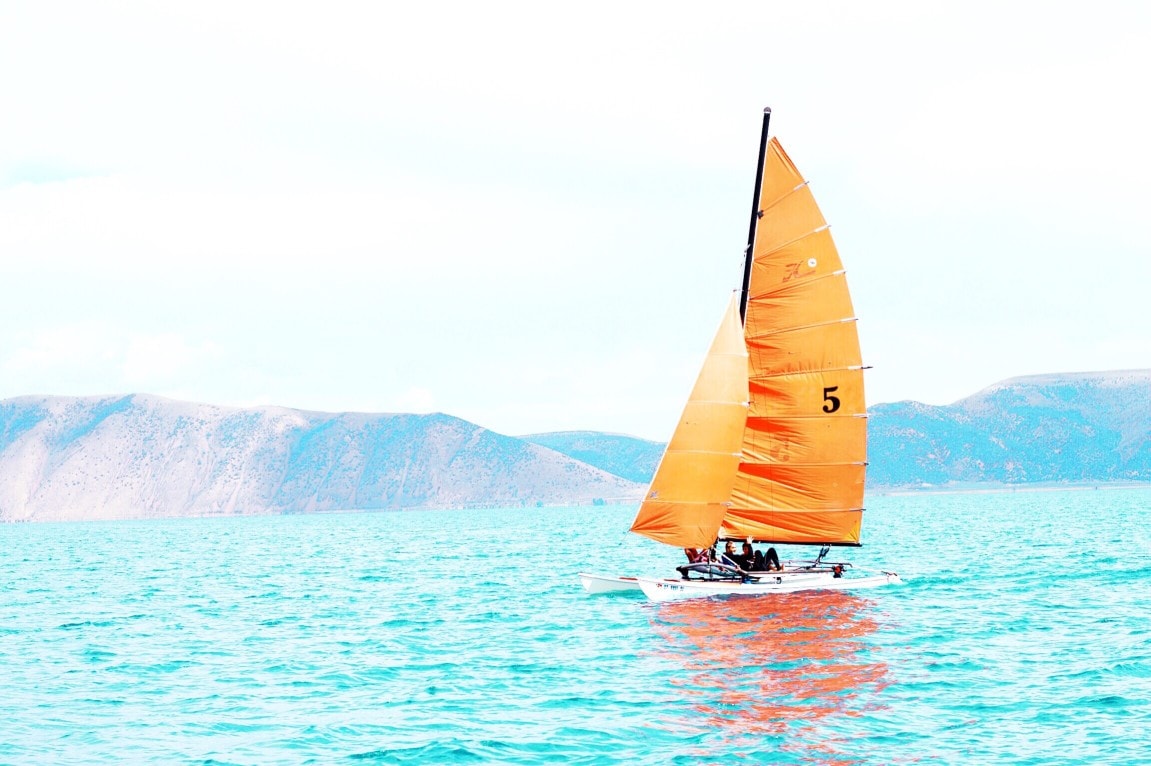 Raising the sails on your sailboat for the first time is an exhilarating experience, but what exactly can you expect?

How do You Raise Sails on a Sailboat? Sails are raised using lines called halyards. The mainsail is raised on a horizontal rod called the boom and the jib sail is raised in front of the main with no boom. The spinnaker is a unique sail for going downwind, which is raised at the tip of the bow using special lines.

Read on to learn how to raise each sail on your sailboat, as well as which needs to be raised first and which circumstances they are best for.

If you’re raising your own sails for the first time, the chances are that you are on a small boat. It’s best to start with a small sailboat as you learn, since the stakes and risks are lower for such boats.

Sails are much easier to raise on a smaller boat and the consequences if you do something wrong are much lower. You can get an inexpensive small sailboat for only a couple of thousand dollars or even several hundred dollars for a used boat.

Be Careful of the Boom

The mainsail is attached to the rod that goes horizontally across the sailboat, called the boom. You and any passengers in the boat will need to be very careful of the boom as the sail is raised.

The boom tends to swing about and can easily hit you or even knock somebody off of the boat. Some small boats have booms that rest on the deck and are raised by the mainsail, while other booms are held in place by rigging until the mainsail is raised. Either way, you’ll find the boom to be quite mobile as it goes up.

Steps to Raising the Mainsail on a Small Boat

Point Into the Wind

It is essential that the mainsail not fill with wind while you’re raising it, so your boat must be pointed into the wind when you raise the main. If you are anchored or moored from a single bowline, your boat will naturally tend to point into the wind, so it is generally easiest to start from this position.

However, if you are docked or moored with multiple lines such that the bow doesn’t point into the wind, you may not be able to raise the sails until you release the boat. If you have an engine, you can use motor power to point into the wind.

If you don’t have an engine, look for ways to let the boat hang from the dock on a bowline while you adjust your sails.

Make sure the mainsail halyard shackle is tight. This essential hackle keeps the mainsail aloft, so it is necessary to make sure that it is firmly fastened and has no weaknesses.

You don’t want any resistance as you raise the main, so loosen the mainsheet so that the sail luffs freely in the breeze. Some sailors completely release the mainsheet while others just loosen it. Either way, the sail should be luffing in the groove of the mast.

Pull the halyard by hand until the luff is tight, and then hoist the sail. If the halyard gets tight before the sail is up, make sure that none of the ropes have jammed. Be sure that the loose part of the halyard is not wrapped around something near the top of the sails.

If you see a jam, lower the sail a bit, clear the jam, and continue. The sail should be raised until all horizontal lines are smoothed out and a couple of vertical lines can be seen from the tip downward, especially a line from the very tip down to the bottom parallel to the mast.

When the sail is high and the luff as tight as possible, cleat off the halyard. At this point, your mainsail is raised.

Release the Boat and Trim the Mainsail

Release the boat, turning it into the angle you would like to sail at. Adjust the mainsheet until all the vertical lines are smoothed out. If you can’t get rid of them, your halyard might be too tight and need to be loosened a bit. Adjust the angle of the mainsail as needed to catch the wind as desired.

Raising the Jib on a Small Boat

The jib lets your boat catch more wind at any angle that is good for the main, and also allows you to get a little more power at a reach. Raising the jib on a small boat is very straightforward. The jib is not attached to a boom, so raising it is simply a matter of pulling the jib halyard and cleating it off.

Just as when raising the main, you will want to face off into the wind until the sails luff so that there isn’t any pressure on the jib as it is going up. If you encounter stress on the jib halyard before the sail is raised, check to make sure that the sail or lines have not been snagged on anything.

It can be a bit challenging to keep your boat pointed to the wind while you raise the jib. Either ask your passenger to steer the boat for you, use autopilot, or position yourself so that you can pull up the halyard and steer the boat at the same time.

Raising the Spinnaker on a Small Boat

The spinnaker goes up at the very tip of the bow and tends to easily adjust itself. This makes it perfect for downwind sailing, but it can also handle a slight downwind reach. The spinnaker won’t be used for every sail but may be perfect during still days.

Unlike the main and the jib, the spinnaker is not rigged into sailboats ahead of time. Spinnakers are used less often and they are more delicate than other sails, so they are kept inside a bag and only deployed when needed.

Every small boat will be different in just how the spinnaker is attached. Some boats attach a bow sprint for the purpose, while others use a permanent bowsprit or go without a pole. Once the spinnaker is appropriately attached, raising it is a matter of pulling it up briskly as you keep pointing into the wind.

Differences When Raising Sails on a Larger Sailboat

If you’re considering sailing a larger boat, it is best to learn how to handle it under the instruction of somebody who already knows how to do it.

If you want to start on your own, start with a smaller sailboat where the risks and investment are lower. There are some key differences between raising sails on larger sailboats and smaller ones.

link to What Boats are Unsinkable?

There are few things that can fill a boater with dread like seeing water rush into the hull. Impact with debris or the ocean bottom can be disastrous in an old-fashioned boat, but with an unsinkable...

Continue Reading
link to What Boats Are Made In North Carolina?

Choosing a new boat is a huge decision. Whether you're looking for a weekend getaway boat or you are searching for something to live aboard permanently, choosing the right boat maker in North...

Hey there! My name is Kern and I’m passionate about boating. I’ve been running boats since I was 10 years old.
I’ve learned a lot over the years and learn more every day. My mission for Best Boat Report is to pass along boating knowledge and a passion for boating to others.

This site is supported by our participation in affiliate programs and page advertisements. We are a participant in the Amazon Services LLC Associates Program, an affiliate advertising program designed to provide a means for us to earn fees by linking to Amazon.com and affiliated sites. We also participate in programs from eBay, CJ.com and more. With this said, our opinions are always our own and we do not recommend products we do not like.